Want to help shape the future of gaming? A great way to learn the basics is through the Associate of Applied Science (AAS) in Computer Graphics and Programming (CGP) degree offered at Missouri State University-West Plains.

“We provide students the opportunity to get in and learn about game art, programming and design so they can find their passion before they go on to more specialized studies,” said Jacob Poulette, assistant professor of computer graphics and programming. “It’s a stepping stone to expose them to all major areas of game design, where they can start building their portfolios and move on to a four-year degree program.” 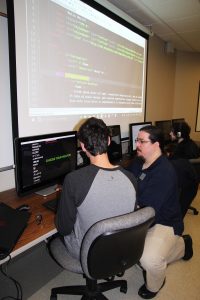 Poulette, too, studied CGP at Missouri State-West Plains. Although his career path has enabled him to stay close to home, many who seek a career in game design will need to relocate.

“When I studied here, my goal was to get this degree and go design games,” Poulette said. “This is easier now, but the Midwest doesn’t have as many job opportunities. The east coast, west coast and Texas are the main hubs of gaming.”

The degree program, however, offers many useful skills and exposure to technology that are beneficial for many career paths beyond the gaming field.

“A lot of our graduates end up working in enterprise development and in website development,” Poulette said.

One such graduate is Will Mahan, a Gainesville resident who completed his AAS in CGP in 2013. Mahan also works at Missouri State-West Plains as Campus Media Services Coordinator. He manages the campus’ digital signage system, produces promotional videos and assists faculty with various media projects. He also does part-time web content management for the Ozark Radio Network (ORN) and freelance work that includes graphic and logo design, branding and designing posters for the CGP department’s annual Oz-Con event in West Plains.

“Pretty much anything that has to do with pushing pixels,” Mahan said.

“Every CGP class, I felt, was beneficial,” Mahan said. “Every class had value. I’m a big believer in CGP, and I’ll plug the program any chance I get. I think that’s a big part of why I chose to work here, too.”

Mahan started college as a non-traditional student. He was 37 when he enrolled in 2011 and knew he didn’t want to go for the campus’ traditional transfer degree, the Associate of Arts in General Studies degree.

“I went into CGP for the same reasons a lot of people do,” Mahan said. “I liked games. I liked stories. I liked living outside of reality and creating my own reality for entertainment purposes. I’m also a huge nerd. When I enrolled, I wasn’t sure what I was getting into, but it didn’t take long to realize I was home.

“I came here wanting to learn about programming, but I found out I wasn’t that great at it,” he added. “Before I enrolled here, though, I had been an amateur Photoshop user for about a decade. I began to take it a lot more seriously when I came here and realized I had a knack for it. I refined my skills with the formal training I received here and embraced the design side of CGP.”

After earning his degree, Mahan spent a lot of time studying on his own to further hone his craft because his experience taught him the value of self-study and staying caught up on technology, which is an ever-growing part of today’s world.

“The best piece of advice I can give students is come here prepared to work,” Mahan said. “As important as my training was, the most valuable thing I walked away with was networking. I met a lot of great and really smart people along the way who encouraged me, and now I have a job here because of that. Get to know your faculty, staff and fellow students, and when you have opportunities to volunteer and get involved, take advantage, because that’s how you stand out. And don’t hesitate to ask for help when you need it.”

Weston Mitchell, a sophomore from Cabool, has wanted to be a game designer since he was in fifth grade. He initially wanted to attend the DigiPen Institute of Technology, but couldn’t use his A+ scholarship there. Instead, he chose to come to Missouri State-West Plains to learn the basics of CGP and find out if making games was what he truly wanted to do. Mitchell said he feels his experience has helped him focus his interest.

“When I started, I wanted to learn more about the programming side of game design, but because this program is set up to allow students to experience all aspects of game creation, I have realized that I prefer the animation and design aspects more, so that is what I will be focusing on in the future,” Mitchell said. He he plans to transfer to DigiPen after obtaining his AAS in CGP to his Bachelor of Arts in Game Design there.

Jim Listopad, also a sophomore from Cabool, chose the AAS in CGP because he wanted to become a software developer.

“While most with such intentions would have picked something along the lines of a computer science degree, I felt a keen interest in the sub-field of game development. I plan to use this degree to either find work in the area of software development or to continue my education in computer science. I feel that the CGP program offers me and other students a path to learn the ideas of computer science in a more top-down style, allowing people to see what the end results can be while still learning necessary job skills as a software developer.”

For information on the required courses for the AAS in CGP program, visit http://wp.missouristate.edu/ctp/computer-graphics-and-programming.htm.