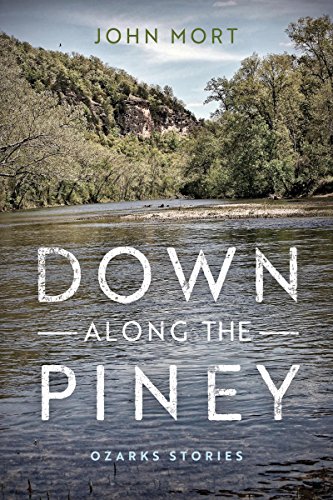 John Mort has quietly been assembling a significant body of work in novels and short stories that go back more than thirty years. A resident of Springfield, Mort has written fiction encompassing a wide range of subjects and locations, from Vietnam, where he served with the First Cavalry Division, to the American West, to the Missouri and Arkansas Ozarks. That stream of work reaches an important milestone in September with the release of Down Along the Piney, a collection of short stories that was this year’s winner of the Sullivan Prize from the University of Notre Dame. This prize recognizes a collection of short stories from a writer who has previously published at least one collection.

Down Along the Piney is a collection of thirteen stories, mostly but not entirely set in the Ozarks. It follows in the path Mort set down in The Walnut King and Other Stories, his 1990 short story collection, and Goat Boy of the Ozarks, his 2011 novel that takes the premise of the short story “The Walnut King” and expands it into a novel-length fiction. (Readers who first encountered Mort through his 2013 novel The Illegal will find it interesting to read the story “The Hog Whisperer” in Down Along the Piney, as the story of “The Hog Whisperer” is retold in The Illegal from the opposite point of view.) Taken together, all these works develop a distinctive and engaging portrait of today’s Ozarkers.

The characters in Down Along the Piney often find themselves in desperate situations – not necessarily physically, but emotionally or spiritually. A poignant story entitled “Mission to Mars” focuses on a young man named Brad Naylor, once the “smartest kid in high school” in a small Missouri town, whose life could be measured by its lapses. Mort writes, deep into Brad’s consciousness:

Surely, if a kid worked hard enough and could think fast enough, he’d succeed. But a kid couldn’t think at all, and story of his life, Brad tripped himself up. He got a scared little Christian girl pregnant. She was cute. Wore those short skirts. They set themselves up in a rented trailer, and saved for a house, and tried, and tried, and tried, to join the middle class.

But Brad’s talent for self-sabotage exerts itself again a few years later when he steals from his employer, the local bank, to make some missed mortgage payments. The theft is discovered, and forgiven, as is often the case in small towns; but something in Brad’s nature doesn’t allow him to accept a life of predictability and limitation. As the story opens, we see him arriving in Florida, having run away from home and family, starting a new life as a short-order cook in a run-down diner. Brad is a fugitive, but not from the law. He is a fugitive from himself.

Pressed by their circumstances, the characters experience loss and longing. This longing may be for an actual place, or for an imaginary place, or for some quality that they sense – intuitively – is missing from their lives. “The Hog Whisperer,” one of the most significant stories in Down Along the Piney, portrays Carrie Kreider, a physically and socially awkward woman, whose oddities alienate her from the people around her although they prove surprisingly useful in her job at an immense hog operation in west Texas. But Carrie’s longing for meaningful human contact pushes her into decisions that most people would call foolhardy. Another story in the collection, “Red Rock Valley,” focuses on Donald Stone, an aging gay man who has lost his longtime partner. He is called home from Chicago to the Ozarks when his father is near death:

He checked in at the nurses station and saw the doctor—a tall, grave Kenyan he could barely understand—the one time he would. “Alvin does not like the catheter. He fights, and he is a very old man.”

“He was never in a hospital. Will he get through this?”

The doctor shrugged almost contemptuously and then caught himself, as if, in the past, he’d been criticized for his insensitivity. He shook his head. “What we can, we do.”

So, Donald thought. My father is a dead man, and that is why I am here.

But in this atmosphere of double loss, Donald seeks reconciliation with his uncomprehending family and healing for his psychic wounds.

Another story in Down Along the Piney places this sense of loss right in the title: “Home Place.” Another strayed son, Wayne Dietrich, comes home to Texas County to review his relationship with his deceased parents and to try to make a new start in life. Fixing up the old home place, he reminisces:

In winter, late at night after Henry and Louise had gone to bed, he liked to prop his bare feet on the oven door, shifting them as they toasted. He read Jack London’s Klondike stories here, as the wind howled out of the woods and slapped snow against the kitchen windows, and the imperfectly dried slab wood his father bought from the sawmill shrilled with escaping steam. He heated cocoa, solved his algebra problems, and fretted whether girls named Susan and Miranda and Meg would go out with him.

“Where are they now?” he murmured, sipping soup as if it would restore life. He visualized each teenaged girl even though they all were in their thirties now, married and divorced and married again. The smart ones, the pretty ones, all left for the city and never returned. You couldn’t make a living in Texas County.

This sense of loss puts the characters into motion, sometimes in irrational or foolish ways, and puts them at odds with the prevailing desires of the people around them. They flee the real or imagined bonds that hold them down. They lash out at those who care for them, or retreat into stubborn insensibility. And occasionally, although this is rare in Mort’s stories, they engage in violence. In “Take the Man Out and Shoot Him” in Down Along the Piney, probably the closest we get in any of Mort’s stories to the hillbilly-noir gothic sensibility we see in other Ozark writers or narratives set in the Ozarks, a young man named Birdy, a former meth user from Shannon County, becomes involved with a right-wing Christian theme park called New Jerusalem near Eureka Springs.

Birdy had learned about Jesus and being saved long before, at the Granderson Treatment Center. If you went on about religion there, they treated you better, and he came to think of Jesus as his ace in the hole. Sometimes, he forgot about it, but down deep still believed he could be redeemed. He said, “I’d rather burn in hell than go back to Shannon County.”

As one can envision from this quotation, things do not go well for Birdy.

Two additional thematic tendencies deserve note. First, many of these stories can be read in terms of their religious imagery. Never didactic or overt, the stories nevertheless bring us characters who are experiencing conflict between what one must call their spiritual and their worldly selves. Some of these characters are specifically thinking about God; others are more generally contesting short-term desires with more abstract aspirations.

Another characteristic is that Mort’s work expands the cast of characters in Ozarks fiction. Not all of his stories in Down Along the Piney are set in the Ozarks, or include Ozark characters; but of those that do, there’s a rich range of characters: poor, uneducated country boys; those same country boys, grown into an aching middle age; the mid-level inhabitants of small town – firefighters, deputies, bureaucrats; fundamentalist preachers and members of their flocks; retired military men, fighting off with varying degrees of success the ghosts of the wars they fought; and to my mind the most significant, expatriates. As we know from our rural sociology, or from our literature, the longing for an absent homeland is an immensely powerful emotion. And in these stories we encounter many characters in economic or self-imposed exile from the farm or small town where they grew up. The sense of longing I mentioned earlier is particularly intense in these stories, even if the characters are sometimes unaware of what they are longing for. The Ozarks means something to these characters, living in Chicago and St. Louis, Georgia or Florida, and an important part of their story comes through their working out that meaning.

I would point to the final two stories in Down Along the Piney as examples of the importance of this impulse. In “Mariposas,” the main character is a fifteen-year-old girl named Portia, born in Arkansas to Mexican parents, who must return to Mexico when the father is fired from his job at a meat-processing plant for being too old and slow. Portia is not someone we would ordinarily think of as an Ozarks character; but she is just as Ozarks as the rest of us, nowadays, and her unhappiness in Mexico is a compound of alienation from the country most of us would describe as her “homeland” and a longing to return to the familiar surroundings of Dardanelle, Arkansas. Ironically, she sees the local girls in Angangueo as “hillbillies,” applying the familiar term of dismissal in the opposite direction of its typical use.

Angangueo, the “hometown” her parents return to, is the terminus of the monarch butterfly migration (thus the story’s title). And so one morning Portia accompanies her father as he guides a group of these tourists, Americans like herself though they would never recognize her as such, into the mountains to see the butterflies. The story’s ending is a gentle recognition of the central metaphor suggested by the title, that Portia and her family are themselves mariposas, migrating in perpetual circulation between their Mexican nesting grounds and their northern reaches for reasons that are unfathomable but impelling. The Ozarks are far from Angangueo, and yet they are not.

The final story, “The Hidden Kingdom,” follows a young man named Eddie, who is for all practical purposes wasting his life in a factory job in Georgia, until by a mere chance he wins the lottery. There is a fantastical quality to this story as Eddie sets out from Valdosta toward an unclear destination. He doesn’t seem to know where he’s going, and as he travels, everywhere seems to be the same: “McDonald’s, Papa John’s, Pet Palace, Walmart, Manny’s Chiquita, Paesano’s, Mattress Land, Home Depot, Kroger, Walmart, Baptist Church, Culver’s, Bank of America, Verizon, Checkers, Target, Comfort Inn, Wendy’s, Jack in the Box, Dickey’s.” But his direction is west and north, and finally he reaches a place where the chain stores end. A tiny town on the Piney River, sort of a rustic utopia with a winery, a canoe rental, a dulcimer shop, and of course a drug treatment center. Eddie the Ozark Odysseus has come home, and as he says near the end of the story, “Maybe you came to this woebegone, dreamy place before entering Heaven. You walked through the deserted town and topped a hill. You looked back and couldn’t remember where you parked. You walked on, free at last, toward the singing.”

Down Along the Piney is an admirable addition to any bookshelf of Ozarks writing, with stories that are sad and sweet in roughly equal measure.