During the National Holiday, some friends and I went to Shanghai. We took an overnight boat ride from Dalian to Weihai. The boat ride was a blast! We spent most of our time on the deck letting high winds push us around and letting the ocean mist cover our faces. The next morning we arrived in Weihai. After arriving in Weihai, we went to an island that commemorated the Sino-Japanese War. The island was very historic and I learned a lot. In addition to learning a lot, it was extremely fun! I wish we could’ve had more time there. After the island we went to a beautiful beach and got to experience some Weihai culture. Weihai was very similar to Dalian, but it had some subtle differences. We spent the night in Weihai and caught the train the next morning to go to Suzhou.

To be honest the train, at first, was not my favorite part of the trip. It was crowded and uncomfortable. At some point though, I asked my Chinese friend to teach me the chorus to a song called Xiao Pingguo, which means Little Apple. All of a sudden, a plethora of old ladies started singing with me. To my surprise we started a mini concert in the train! There were probably 15 old Chinese women listening to me sing random Chinese songs. They then asked me to sing American songs. We finished the concert with each of our groups singing our National Anthems. It was beautiful to hear all of the old ladies sing the Chinese National Anthem in unison. After we got off of that train we took an overnight train to Suzhou. This train was much more comfortable and spacious. We then arrived in Suzhou that morning.

After we got off of the train we headed straight to a place called Tiger Hill. It was a beautiful area with a gigantic pagoda. There were many festive things going on at Tiger Hill, so in addition to the raw scenic beauty, there was also a lot of celebrating. After Tiger Hill we took a bus to a water town in Suzhou called Zhouzhuang. This place looked and felt like Italy’s Venice. We rested that night in a beautiful hotel on the water. The next morning we got up, purchased many souvenirs and took a “gondola” ride through the city. After the boat ride we explored the city even further until we had to leave. When it was time to leave we took a bus to Shanghai, and from that bus we took a metro to our hostel.

Once we got to Shanghai we were exhausted, but we went out to get fried baozi and see the Pearl Tower. The Pearl Tower is beautiful at night; it shines with many different colors and immediately catches your attention. We then went back to our hostel where we shared a room with strangers. The room had a total of 10 people in it. The next day we went to the local markets and went up to the top of the Financial Building. The Financial Building was huge! We could see all of Shanghai (luckily it wasn’t smoggy that day). The tall tower was definitely one of the main highlights of my trip. We then slept in our hostel that night, which was very clean and homey. The next morning we got up and went to an amusement park. Unfortunately, it was National Holiday, which meant that the park was beyond crowded. We spent four hours there and only got to ride three rides. After we got done with the park we took a bullet train to the airport and departed for Dalian. Overall, my National Holiday was a fun experience that I will never forget. 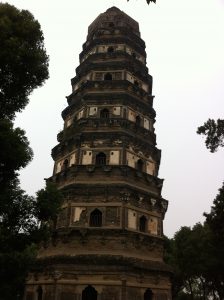