You are here: Home / General / An Ant on Top of an Ant Hill

I am just going to go ahead and Lay this out here.. China was and is a complete culture shock. From the smells of the street food (or bodily functions), to the views that my eyeballs have never seen before or could even imagine in my life. When I first arrived in Dalian, I immediately thought of New York.. but on steroids. I know your thinking in your mind right now, how in the world can New York in itself be on steroids? Well, its very possible and it does in fact exist. What is even crazier is I thought that China wasn’t even a touch of what other cultures are like. I recently took a trip to Thailand and Vietnam, and culture shock could not even describe my experience. It is so amazing to me that sometimes we feel so big in this world because, yes, the United States is a fairly larger country, but we are a tiny ant compared to this big world we live in. Our culture is just a pure existence of this world.
I am going to start by telling you that Asian culture is not the same.. it is not even a genre for how everyone lives because every country lives completely differently in their own atmosphere. I got to spend three days in Thailand, and believe me when I tell you that I was NOT prepared for Thailand when I arrived. I mean I had this predisposition of what Thailand would be like but I was wrong in so many ways. Of course we were told what it would be like, or things to expect.. but it was the complete opposite of what it was actually like. Thailand is a monarchy, and that definitely showed in their culture, which to me, was very cool to see because we only read about those things in textbooks in America. The people always smiled, and they were all very active in the night life. One minor side was that Thailand was very dirty and you could tell that they were a poor society, but it never seemed to stop the people from smiling and loving their life everyday.
After spending three days in Thailand, we left to depart for Vietnam. The only way I could really describe Vietnam was kind of like being in “The Twilight Zone” because I really just had no idea what was going on. You have to keep in mind that I have now experienced two completely different cultures already, with two different languages and two different lifestyles. So, coming into Vietnam was like just a mesh of a whole new culture with what I have already previously experienced. When we arrived, everything was so pretty, and bright, but yet barren. It was almost like there was no one around, yet you could see people. When we arrived at the beach it was almost like a dream. we walked there, and along the road, the parking lots were empty, there were houses boarded up, and the beach was completely empty. Picture white loose sand, connecting into bright blue water that gets darker and darker the farther you look out.. and it was EMPTY. We literally had the beach all to ourselves. It was just amazing. We did figure out that there were many things boarded up because they recently had a typhoon. But the people, just like in Thailand were so happy. 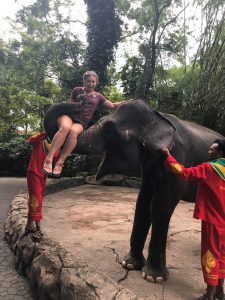 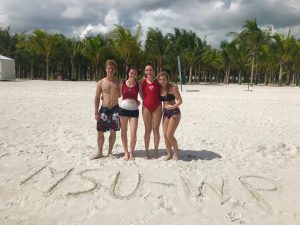 As I flew back to China.. it felt like I was home, when I really wasn’t going to my real home. It feels now like a normal way of life. Smells do not stick out any longer, the people feel like my people, and the streets feel like the corner right around my home. Just a few months back I would have never thought this. It amazes me that I am such a small person in this big world, and I can be on the other side of the planet and still live a normal life. Traveling had really helped me grow into the person that I am now. I definitely do feel grateful for things that I have back in the United States. But, I also wish that some people in the United States could live the way that Chinese people live everyday. Even though they do not seem to have much, they are so happy. They really value their friendships, and even just a stranger on the street. I feel like a tiny ant on top of this gigantic ant hill looking down on all the different ways of life. The crazy thing is, I have only experienced three vastly small cultures out of the hundred of thousands of cultures there are to explore in this world, and I cannot wait to dive in and learn not only more about myself, but more about what our world has to offer.