You are here: Home / General / Take Me Home… But Not Really!

Despite China’s constantly altering society and progression, they still do not celebrate the same holidays as Americans. Unfortunately, that means we 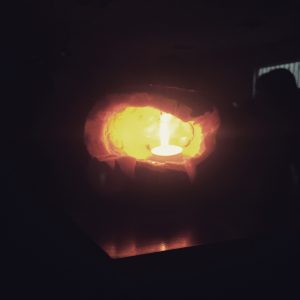 did not get to see hundreds of Chinese children flooding the streets in classic costumes, Trick or Treating. However, since this campus is a branch through Missouri and has many American influences, they choose to celebrate Halloween in their own way. Whether this is in an effort to show the Chinese students the traditions, or to make the American teachers and us interns feel more at home, I’m not sure. Either way, it was a different experience. The Thursday before Halloween, we had a Pumpkin Carving Party. It was nothing like I expected; I got a very small pumpkin, along with a faulty kitchen knife. Needless to say, that killed any possibility of carving anything intricate. I had planned to carve all of the continents, but settled for just doing America. Anyways, we all sat in desks in a large classroom and carved while they had games for entertainment in the front… games such as arm wrestling. People, including myself, were picked at random to compete and win prizes. It was a fun night, followed by an even better one Friday. The school held a costume party, which consumed the entire fourth floor of our building. They used all of the classrooms for different things; some were for games, mazes, scary rooms, face painting, and some with music and food and entertainment. It was by far one of the best Halloween experiences I have ever had. Rosemary and I spent the majority of our night playing things such as spoons, cards, and hand games with our Chinese friends and some of the teachers. We stayed the entire time and I didn’t expect to have so much fun playing simple games for hours.
However in the midst of the games, Rosemary and I decided to go into one of the music and entertainment rooms. We had a seat and had some snacks while an act proceeded to begin at the front of the room. Two men started to flip glass bottles, juggling and tossing around in a very skilled way. But I was more taken aback by the song that was playing while they were doing their act; it was “Take Me Home, Country Roads” by John Denver. I don’t think I had ever heard this song before and it made me think of home. I am still not homesick here; I am not ready to come home… but this song hit me in the heart. While I am not ready to come home, I do miss being around what makes home, home. It reminded me of everything that I have been away from and had forgotten about for months. I tried to hold back tears, but not because I was sad. These were just feelings that were suddenly surfacing, that I didn’t even know were there.
This song began to appear everywhere… a few days after the Halloween party, I heard it at the mall. Then, some of us went to the movies this past weekend to see Kingsman 2. I didn’t see the first one, but they wanted to go so I tagged along. The song seemed to be the theme throughout the entire movie, playing at least four different times. The movie also featured settings in America. At the end *spoilers*, when one of the main characters dies, he does so while singing this song. It was very powerful just in the movie itself. That, along with what the song reminds me of, made me extremely emotional. This song brought back thoughts of home that I had completely forgotten about and I now treasure it . Anyways, I am not yet ready to come home. I am still loving my time here, but when I fly home, you can guess what song I’ll be listening to the whole way there.