You are here: Home / General / Not So Cliche 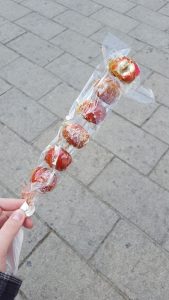 Recently I played a game with some Chinese students that would help them learn more English and help me to learn some Chinese. There were several pieces of paper with either English or Chinese words written on each piece. If the word or phrase was English  I would explain it to them and if it was Chinese they would explain it to me. The Chinese words they had written down to explain to me included slang words, a popular Chinese TV show, and the name of a popular street food only sold in the winter time (which I tried recently and it’s delicious). As a foreigner I would not have chosen, much less known any of the things they wanted to teach me about. The English words they chose for me to explain to them included things like Taylor Swift, Harvard University, Rock n’ Roll, Gossip Girl, and Sherlock. I tried not to laugh at how cliché the things were that they picked for me to explain. I have to be honest though, if they had asked me to explain Chinese things to them before I knew anything about China I would have picked all of the clichés too: things like Kung Fu and Fortune Cookies.

I learned that people have clichés about Americans just as much as we have clichés about other people and cultures. Being able to live in China has allowed me to learn how much bigger people are than their surface culture. Like every other culture China is unique, beautiful, and much deeper than the clichés that we pin on them.