You are here: Home / General / Yonder I Wander: Exploring Dalian on Foot

I’ve always valued getting to know a place by taking leisurely strolls. Taking it slow really lets you get a feel for where things are, and you get to see a lot more than if you were just speeding through by bus or taxi. For me, the opportunity to get to know a new place in such a way and to have so much freedom and independence has been my favorite part of the program. My course load has been light this semester, and even though we have to spend 20 hours a week in the Academic Center, I have had plenty of free time. I just loaded up my map when ever I had WiFi, pick a place that sounded cool, set off in that direction, stopping along the way anytime something piqued my interest.

At first, I went on my walks alone. They were “short” and just covered the main road that runs to the south of our dorms. I would walk to the west around Malan Square, visit the bakeries and try their awkward pastries, and explore the local food market street. Down the main road to the east, I would walk to Xian Road where we often go to shop and eat. It’s about 2.5 miles from the campus’ south gate and I normally take around 40mins or so to make the treck. There are plenty of buses that head that way, but I personally find a longer walk preferable to the crowded buses. Xian Road is home to the Roosevelt Shopping Center, Carrefour (it’s kind of like Wal-mart, but with imported goods), and several Western food chains like McDonnald’s and Pizza Hut. 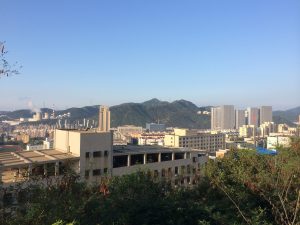 The hills to the north and south of campus are also common places that I frequently walk to. Both have excellent views of the city and the Chinese that you meet up on the slopes are quite interesting. They carve little clearings out of the mountain sides and use them for social gatherings and exercise. You can climb a mountain at 5:00 AM and find little enclaves of elderly Chinese people just chilling in these places, all smiley, making brooms out of sticks, stretching out and doing Ti Chi, and all sorts of other stuff. Just the other day I came across a group of three Chinese men with pick axes just digging up random large rocks along the trail; other times we’ve come across people taking a stroll while playing the flute, or just shouting at the top of their lungs as they walk down the the paths. The mountains to the north are more popular with the locals it seems, most likely because there is an abundance of paved trails and they are generally not as steep as those on the south mountains. The north mountains also have large cemeteries. They’re pretty eerie place and they aren’t very well maintained; many of the markers are broken and the site seems generally unkept. The hilltops are also home to quite a few official looking installations; I think that most are weather stations, but I really can’t say for sure. Most have barbed-wire fences around them, but the Chinese seem to hold these boundaries with very little regard. Many paths go through the fences where the Chinese have just cut the wire, and in some places they have taken the posts and fashioned them into chairs for their meeting places. 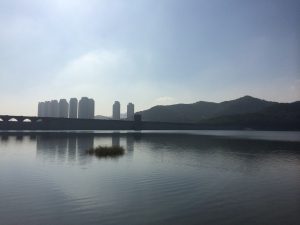 As a group, We have taken two long walks. The first was to a place called Xinghai Square. We had a group of four for that one and we covered about 8 or so miles. Luckily, we’ve had significantly more clear days than stormy or smoggy ones, but that was not the case on our walk to Xinghai Square. It was overcast that day, with some light rain from time to time, but the air-quality was good. We walked east from the dorms to Xian Road and then headed south toward the coast. The road follows a shallow canal until it reaches the sea. Near where the canal meet the sea, there is a massive hotel styled after a European castle built into the hillside. Just to the east, across the canal lies a small amusement park, the Dalian Centennial sculpture (which is kind of like a really wide half-pipe), and the oval-shaped gardens of Xinghai Square. We just relaxed and saw the sites. We lounged around at the top of the Centennial sculpture, and Andrew ramped a bottle of water off the side of it, nearly hitting an unsuspecting Chinese couple. 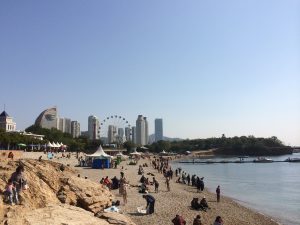 As for the second long walk, the crowning achievement of my navigational skills as far as I’m concerned, had only a group of three; Andrew opted not to come on this trip so it was just Nick, Emily, and myself. For this trip, I set the goal of reaching a temple far to the west of town. I normally do very little planning aside from working out a departure time to keep from having to rigid of a schedule and that was also true for this trip. I knew the route based on my iPhone’s partially-loaded Apple map, but I didn’t have street names. I also only eyeballed the route to get an idea of how far and how long it would take to reach our destination. I also expected there to be buses running along the whole route so there wouldn’t be a need for a return walk. As it would turn out, both were arguably bad calls. The trip was off to a great start; we left early in the morning and walked along the reservoir, had coffee and cheesecake at nice coffee shop, and were well on our way down the road. However, we did not stop for a legitimate lunch and when noon came around we were getting into some pretty rural areas. Nearly ten miles down the road we came to the end of the last bus line that followed our route. At that point, Nick was quite displeased with the lack of a good meal, the lack of an idea as to where to get a good meal, and the fact that I didn’t work the possibility of there being nowhere to eat lunch along more than half of our route.

The group was on the verge of disbanding; Nick was going to take the next bus back from whence we came and as a group we could not agree on when we should turn back if we chose to continue. I wanted to see it through, Emily was still onboard for continuing for at least a while longer, and Nick was very unhappy and very hungry. And so I struck a deal; If Nick stayed with the group, I would buy his meal when we reached our destination. He accepted, but was still displeased. Our trek became a march and we covered ground fast, but the atmosphere of our journey was no longer leisurely or pleasant. The path was still very beautiful, for we were far outside the city in a region full of small towns, rivers, and verdant hills. Along the way there were farms and random stalls where people were peddling their harvests to passers-by. It all felt very distant fro the city, and in fact it was. Nearly 5 miles after the last bus stop we came to the temple. I’ve forgotten the name of the place but it was pretty nice. One of the most noteworthy places in the temple district was the Bridge of Trust. I thought it kind of amusing, since Nick had trusted me and my plan, and I had seemingly betrayed that trust. His expectations were not in line with mine and it was overall a pretty good example of the problems that come with bad communication. I don’t blame him, of course, for being displeased, and his mood did improve slightly when we arrived, only to plummet into the ground when we found out the only place to eat was a vegetarian cafeteria. On top of that, we had to back-track to the aforementioned bus stop. So we stocked up on drinks, marched 5 miles back to the bus stop, and by luck we arrived less than half an hour before the last bus ran. Thus ended our 20 mile walk. We then went to Pizza Hut, and, as recompense for my poor planing, I covered our meal. Nick still counts the trip as a mistake, but I enjoyed it for the most part, and Emily also got some enjoyment out of it. The trip may not be a glistening example of success, but I still think it was impressive, and overall worth it.

I have learned a lot walking about in China; Primarily that if other people are accompanying me, I should probably plan things out a bit more or at least make it clear that I intentionally did not plan. Walking is how I most enjoy experience new places, and in China there is a lot of room for things to go differently than expected. I’ve covered a lot of ground, alone and with company, and I’ve found a lot of interesting places along the way. It may be easier to take a bus, or at least Chinese friend as a guide, and at times those are certainly great things to do, but for me it just feels so much more rewarding to experience a new place by simply wandering and stumbling across the unknown.