You are here: Home / General / Taking the Leap

There I was in the middle of a park called Xinghai Park standing on a ledge, feet strapped together, hearing words yelled at me sounding vaguely like, “Jump! Jump!” And so I jumped. Without looking back, I plunged myself willingly toward the Pacific Ocean thankfully being caught by the bungee cords strapped to my ankles. Then after a few minutes, I was lowered safely to a boat and returned to the ground again. Bungee jumping in China was easily one of the most exciting experiences of my life. When I got back to my dorm room the evening after I jumped, I began thinking about how much my semester here in China has been similar to my bungee jumping adventure. I love adventures; most people who know me could attest to that. I’ve been skydiving, snorkeling in the ocean, to the villages of Africa, and even once before to China! All of those experiences have had lasting effects on my life, but living in China for the last six weeks has been completely different. It’s interesting how I walked through almost the exact same process when I jumped off of a platform toward the ocean as when I stepped onto a plane to fly over it to China. For both coming to Dalian this semester and for bungee jumping, I was so excited. In similar ways, I had been planning, preparing, and anticipating both long before I took action. I had no hesitation at first because I knew moments and memories like these are what give life its color. However, there’s a big difference between thinking and talking about adventures and taking the leap into the middle of one. 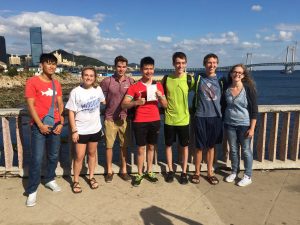 I remember the moment I sat down in my plane seat on August 16 for my flight to Beijing. I looked out at a world that I called home and wondered what I could possibly be thinking. I had been so excited for months for this very moment, but when the moment came, nervousness crept in. I began wondering to myself if I had made the right decision to leave my friends and family, job, university club and organization involvement, mother tongue, familiar food, familiar town, and all the things that made up the life I lived to experience China for the next four months. It was like looking over the edge of a several hundred foot drop. I had been so excited, but when I arrived, I was faced with the reality of risk. I didn’t know exactly what was going to happen once that plane took off just like I didn’t know exactly what was going to happen when I jumped off the ledge. However, I think that’s what makes adventure truly a gift. Christmas wouldn’t be the same if everyone knew what all their gifts were before they opened them. People willing to release control of things like that and people willing to step into the unknown are the people who are surprised with the most incredible gifts. I’ve found that, more often than not, life has way better surprises in store for us than we ever could plan even if we tried. That’s probably the biggest thing I’ve learned in the last six weeks. I never dreamed that this semester would have challenged, grown, and inspired me in the ways it has. It has been some of the greatest times of my life, and I’ve made memories that will last for my whole life. I’ve learned that sometimes it’s okay to jump even if you have no idea what’s going to happen because for those few seconds after I left the edge and chose to go, I felt like I was flying. Some of the best seasons of our lives begin when we are willing to let go of the things that are familiar and safe and just jump.