You are here: Home / General / The Adventure of a Lifetime: Backpacking through China

How many people can honestly say that they have traveled to a truly remote location in the world; to a place so far removed from any possible comfort zone that there is literally nothing to familiarize with? Somehow, I can say that I have been to such a place and experienced a whole new kind of adventure.

First, I would like to establish that my most recent travels have completely torn down the perceptions I had about what it meant to travel. I have found, through experience, that true adventure lies in the spontaneity and ambiguity of the unknown. Most people, when they think of travel, would imagine a suitcase or two, packed to the brim with all of life’s “necessities.” Everything and anything that could possibly be of use on a week-long vacation would be neatly packed inside, and the entire getaway would be planned out, down to the smallest detail. I know all too well this form of travel. I have been a part of that group of people who obsessively worries over the limited space of a suitcase and the strangely terrifying possibility of leaving some important item behind. I have enjoyed the luxury of having my agenda mapped out, and not having to worry about facing the hardships of travel. However, recently my annoying human travel anxieties have been put to the test. Imagine a single backpack, much like the one a college student would carry to class, a ten day excursion into the unknown Chinese countryside, a non-existent itinerary, and a language and culture barrier so thick that it is practically tangible. Imagine these things, and imagine myself in the midst of it all. That is a rough outline of my adventure over the Chinese holiday.

To explain a little,  my journey began in Liaoning Province in Dalian, went through Hebei and Shaanxi Provinces, all the way to where I spent most of my trip, in Qinghai and Gansu Provinces, the locations of Qinghai Lake, part of the Silk Road, and the Gobi Desert. I, and the four other people I was with, left from Dalian by plane, flew to Beijing, boarded an unbelievably crowded train—I plan to elaborate on the “wonders” of train travel later—which we spent twenty hours on with no place to sleep, and were finally deposited in Qinghai Province, Xining. All of a sudden, China as I knew it was very different. We were now in predominantly Muslim territory, and the culture was totally unfamiliar. Anyway, we spent the first night in Xining in a hostel. In fact, we stayed in hostels all throughout our trip and I must say that they are not nearly as terrifying as I expected them to be. They were by no means luxurious hotels, but they were clean enough, warm enough, and had running water, and I was usually so dead tired by the end of the day exploring that the hard wooden beds felt soft and inviting.

The morning after my first night in Xining I was shaken awake by my new Chinese friend, Xiao Luo. She told me, in broken English, that we had five minutes before the car would arrive to take us to Qinghai Lake. I became accustomed to spontaneous events such as this over the holiday, but at first, it was difficult for me to accept that I simply would not know the game plan. Xiao Luo was the one who organized everything, and essentially, my life was in her hands for ten days. This is what I meant by spontaneity and ambiguity; true adventure occurs when you’re not anticipating what’s going to happen next. You just go. Anyway, I quickly put on layers of clothing—it was surprisingly cold in that area of China for fall—brushed my teeth, grabbed my backpack, and ran for the awaiting cab. In fact, it seems like this is what I did most mornings. Woke up, grabbed my few belongings, and ran for it.

We made it to Qinghai Lake, and of course it was well worth the struggle to get there. It was absolutely breathtaking, surrounded by fields of golden flowers, old abandoned clay houses, and majestic sand mountains. We spent most of the day driving alongside the massive lake, stopping whenever we wanted, and enjoying our free time. After making quite a lot of progress on the road, our cab driver had to take us back to Xining. Later, I discovered that our cab driver was not really a cab driver at all…but that’s a story for another time. 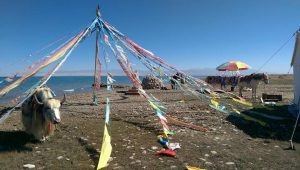 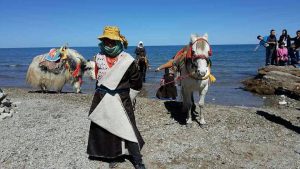 Anyway, our final destination would be Dunhuang. Located along the Silk Road in the far northwest corner of Gansu Province, it is home to part of the Gobi Desert. This area was by far the most amazing and curious place we visited. The territory had transformed again into a mixture of Muslim and Tibetan culture, and there was absolutely nothing that I saw that was familiar. In fact, if I didn’t know better, I would have sworn that the five of us were the only foreigners for hundreds of miles. The topography was much different from the northeast land I had become accustomed to; there were deserts, mountains, and everything was spread out. We +were in the country. As we approached the oasis where we could access the Gobi Desert, the tops of giant sand dunes came into view. The endless ocean of sand was absolutely unreal. It looked like something from a movie, and I wasn’t totally sure that I was even there. As we trudged through the sand towards the tallest peaks, our legs submerged in sand up to our shins, we realized how physically demanding it was. I remember it seemed like hours passed as we slowly picked our way up the sand mountains. However, when we got to the top, the view of the oasis and the sun setting over the dunes was breathtaking. I could have spent the night there under the stars if the temperature wouldn’t have dropped so quickly.

*Also, as a side note, it was here in Dunhuang where I realized we were too far from civilization for my West Plains Bank debit card to work at any ATMS. That was a fun little experience, especially with an over protective mom who freaked out when I shared this bit of information with her. Luckily, all was fine again when we got back to Xining.* 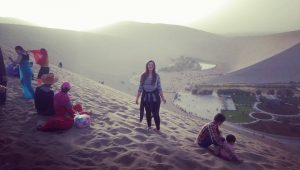 After spending a few nights absorbing the history of Dunhuang and staying in different hostels, it was finally time for us to board yet another train—this was to be our 4th and final train ride—from Xining to Zhengzhou. This trip would be eighteen hours total, however, this time we would have a small bunk bed to sleep on for the duration of the trip. Now would be a good time to give a brief explanation of the horrors of train travel in China. While many people can have a perfectly comfortable experience riding on the high-speed train, that was not the type of train we were riding on throughout our trip. Keep in mind, we are all broke college students and we decided to choose the cheapest option of travel. Unfortunately,  the cheaper trains are much slower and have very few regulations. For instance, a person does not necessarily have to have a seat on the train to ride on it. This resulted in an overabundance of people crammed in any open area, standing, squatting, and leaning wherever they could. I had an aisle seat, which resulted in me being a little too close for comfort to many of the other passengers. Not only was the train crowded, but I had to accept that I would be unashamedly stared at for the entire trip by literally every passenger. I also spent the majority of the ride praying I would not need to use the bathroom…let’s just say I have a very low standard for facilities now. However terrible all this may sound, the experience resulted in many ongoing jokes, and I have a new respect for people who regularly must use this form of travel. Looking back on those endless hours of discomfort on the train, I can’t help but to laugh at the absurdity of it all; it’s definitely a time of my life that I will never forget. Anyway, after what seemed like an eternity, we rolled into Zhengzhou. Later we boarded a plane that would take us back to Dalian. Even though I had had some pretty amazing experiences on my adventures through China, and I wouldn’t trade those for anything, I was really starting to feel homesick for my little home in Dalian. There is nothing I can compare to getting back to my dorm room and flinging myself onto my own bed. Thoroughly exhausted, I slept the hardest I ever have, and promptly woke up for class a few hours later.

I can say I learned a lot about myself during this adventure, and was put in some situations I don’t think I ever would be in otherwise. For starters, this trip redefined the meaning of travel for me. Also, it made me realize all of the luxuries I didn’t even realize were luxuries in America. I feel as if my demands are much fewer and far between here, and my standards for living are much lower. I have come to realize that the things I have grown up thinking I need, I can honestly live without. Truthfully, I’m not sure what it’s going to be like to return home and have everything handed to me again. I’m hoping I will maintain a more humble outlook on life after my experiences here in China, and I won’t forget what I have learned. I also now have an idea of what it’s like to face hardships virtually alone. For example, when my debit card failed to work, or another time when my friend Kelsey and I got off the train at the wrong location (also a story for another time.) I made it through these hardships, and reinforced my own independence while simultaneously making lifelong memories. No, backpacking through China with no game plan was not easy, but the lack of ease made the adventure what it was. We had no choice but to submerse ourselves in a foreign culture and do the best we could. I highly recommend anyone who has the luxury to travel to attempt to go off the grid. Don’t spend time working out the small details, just go and experience whatever comes. I promise it’s worth it, and you just might learn a thing or two along the way. 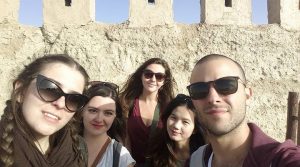