You are here: Home / General / Because It’s China! 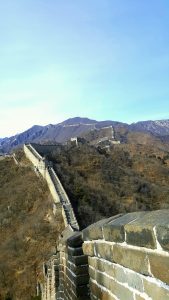 I’ll begin by informing you that when they say it will be a fourteen-hour flight, it will FEEL like a fourteen-hour flight. I must admit, I had spent plenty of time getting ready for this flight in the weeks before I left. I wanted to be ready, but even with all the time I spent getting ready, I was still not, and never would have been prepared. As every minute passed I was furthering myself from the world I had known, and inching closer to the biggest adventure of my life. Why had I left a state that was in seventy-degree weather for a country in its fifties? Why had I left a life of comfort willingly to step into a life where daily tasks would become complicated? I got asked questions like why go that far, why go to that school why chose this path. BECAUSE IT’S CHINA THAT’S WHY! When a door opens for you no matter how grand, narrow or frightening an opportunity will be, you will not know unless you take the adventure. We are not meant to stay in the same place forever. It was this reason that I was stepping off a plane and onto the streets of Beijing, in CHINA! From the airport, to the van, to the hotel, and then to the outdoor shops we did not let the flight rule our first night in China. After a long, long, LONG travel time we finally took to our hotel and prepared for the tour ahead of us.

The Beijing tour was beyond comparison to any tour I had ever been on. We were able to tour the Summer Palace, The Great Wall at Mutianyu, Tiananamen Square, the Forbidden City, the Confucius Temple, the Temple of Heaven, and the Lama Temple. The tour was only two days, but they were two days full of culture, adventure, pictures, and just a little bit of snow! The most memorable part of the tour was the Great Wall. It was a lot of work to cover the distance from the beginning to the top. Parts of the wall were so steep that I managed to knee myself in the chin on more than one occasion. Every step of the way was worth it when I reached the peak. I stood there, and I knew the difficulty that went into maneuvering, and climbing of the wall. I also knew I would never know the immense pain that this wall has caused. I would never know the hearts of the families who lost a loved one to the building or the use of the Great wall. I stood on the greatest work of many lives, and the last work of some. I knew this, and yet it was only my eyes that understood. Only my eyes could comprehend the beauty. It was then I realized that it wasn’t the size of the wall that made it Great.